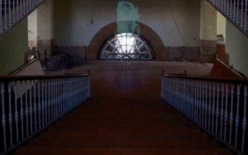 A project by the "Cinema and technology" open group

The “Cinema and technology” open group pursues different lines of research with the aim of producing an audiovisual/cinematographic piece that might take on different forms other than simple screen projection. This multidisciplinary project revolves around the legend of the ghost of Tabakalera and, taking this theme as the central concept, a collective piece will be created in which we will mix both analogue and digital technology and blur the boundaries between the real and the fictional.

The workshop proposes the development of tools and the skills needed to carry out a film and technology project. The aim is to understand planning, filming, editing and post-production from different angles. And we will use this workshop as a basis for planning the production of the project. The idea of the workshop is to apply what is learned to the work that is being carried out by the open group for the investigation of technology in the cinema.

The workshop will consist of the making of a collective 16 mm film with a pronounced experimental character. In the workshop we will learn how to use a 16 mm analogue camera, to develop the film by hand using the black and white reversal film process, and to edit and project the film. The final piece will last for around 3 minutes.

The ghost of Tabakalera will be the generic concept of the film.

embracing the poetic and political potential of lossy compression in a binary system through datamoshing, manipulating video files to the limit of their possibilities. We will see the process of selecting and recording raw and processed pieces by editing or corrupting the files, using software that lends itself to experimentation (Audacity, Avidemux) or programming languages (Processing).

The workshop will consist of the collective making of a distinctly experimental film through the analogical manipulation of film stills and the technique of rotoscoping. Both are processes that, with minimal infrastructure, allow the exploration of our own expressive resources which will stand out from the increasingly ubiquitous and homogenised digital processing of images. Playing, wonder, mistakes and unexpected associations will be an essential part of the creation process, becoming as important as pencil, scissors and glue.

The material to be manipulated will be a fragment of the film previously shot in 16 mm by the attendees of the previous workshop. This fragment will be digitised and the frames will be printed for their manipulation. If that is not possible, we will look for some other existing fragment that is suitable for the generic concept of the workshops. The idea is to generate a new film within the film, creating the idea of ​​zoom or microscope.

Once the manipulation is finished, the piece will be reassembled by recording each frame (digitally or in 16 mm), in this way obtaining new footage with a hybrid nature that will be added to the main film. Before work begins in the workshop there will be a brief session involving the viewing of examples that help assimilate and understand the potential of the proposal.