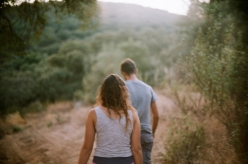 Antier noche is something I’ve always heard my grandmother say. It refers to something that took place the night before yesterday. The past is narrated from the present. The piece stems from my wish to make a film in a forgotten corner of the world, with a group of young people I know and who I’ve already worked with. I wanted to rebuild their story with them, the same story that starts with my family in the 1960s, a time when emigration was one way that people adapted to a time of constant progress. It still is.

Synopsis: Hunting takes place in the countryside of southern Extremadura during the cold winter months. Ana (20) and Juan Luis (25) are a young couple in charge of leading the dogs in this ritual event. For some time, Ana has been thinking about leaving her town for the capital. The two must negotiate the terms of their relationship and whether or not they want to stay together. Martín (11), Ana’s younger brother, is growing up in a rural environment alongside the violence of nature. A rupture in the present may evoke the memory of a fracture between an old world on its way out and an emerging modern one.