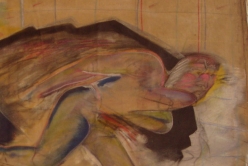 How many identities fit into one life? How many do we know about? How many are we ignorant of?
At the origin of each one, and throughout its exploration, is the excitement of the possibilities that influence and define them.  Un personaje volador sets this constellation in motion. Inspired by a writer (Iosi Havilio) who goes through a crisis after losing his mother, the Argentinian painter Mónica Rossi, the character sets out to meet other lives which are as fictional and real as his own, inhabiting and embodying each one throughout its unique evolution. These other identities talk, think and act—in parallel and solo—each with their own colour, rhythm, language, music and silence.

Synopsis: A writer moves to a mythical hotel in central Buenos Aires while in the depths of grief following the death of his mother. While tackling his next novel, he wanders the city with a roll of paintings that he can’t open. His life grows complicated following a series of chance and enlightening encounters with strangers. One long night, he finally manages to unfurl the works his mother left behind. From now on, he won't be just him: he’ll be Pablo, a lawless yet gentle beast, and Ursula, a bitter and melancholic woman. Three identities, three lives, all forged around one experience.