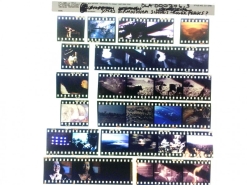 Aire del Mar is a multimedia performance by the sculptor, video-art pioneer and guitarist Darcy Lange. Together with Miriam Snijders, Lange performed various versions of this stage piece in different locations throughout New Zealand between 1988 and 1994. The performance consists of a panoramic screening of sequences of fixed images as well as screens with moving images, dance and flamenco singing and guitar. It is an extension of Lange’s experimentation with environmental art during the final years of his training as a sculptor at the Royal College of Art, London (1968-1971).

Aire del Mar brings together the most significant vectors of the life and work of Darcy Lange: the study of the performative quality of the work; the defence of the Earth which materialised during his extended collaboration in the fight for the rights of the Maori people; and flamenco, the festive organisation of which he defended in the early 1970s as a form of work.

Lange used a blend of his own video and photographs along with appropriated material (from flamenco fiestas in Cortijo Espartero, from media coverage of nuclear testing in Mururoa and from Goya's Black Paintings) for the audiovisual composition of Aire del Mar. Those images together with the music, understood as an abstraction of forms of work, provides the outline of a more ambitious project which the artist referred to as an “audiovisual environmental opera”, a total artwork that would travel around the world in a nomadic tent.

*Invitations may be withdrawn at Tabakalera's information point on the day of the event (until 8pm).