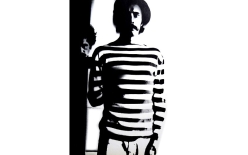 A film by Jose Mari Zabala dedicated to the memory of Joxan Artze.

Garai aldakorretako txoriak is dedicated to the memory of Joxan Artze. I had the opportunity to meet him, and the luck to get to know him and of work with him. For a few years which were part of an unrepeatable period of our lives and our history, we worked together, from the beginning of that first work: Isturitzetik Tolosan barru.

I am convinced that our people will never again face such a decisive moment, and will not have to take on such arduous responsibilities as those of that time. It was such a responsibility that it has left a very deep impression on the following generations, in the way they feel and in the way they understand each other.

That storm was capable of sweeping away everything that stood proudly in its way, which had been there since who knows when – forever – and in its eye the seed that represents the sensibility of the current collective was able to grow...