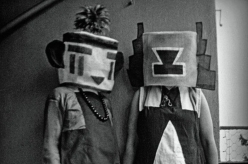 This new instalment of the “Smoke politics” programme aims to arouse public interest in Hugo Ball (1886-1927), an artist who is considered the first “dadaist”, was founder of the legendary Cabaret Voltaire in Zurich, and whose work continues to generate questions and debate in both the fields of art and literary theory.

The proposal begins with a trip to the Dada Gallery in Zurich, where in 1917, Ball gave a lecture entitled “Kandinsky”. In Tabakalera a hundred years later, the writer Oier Guillan, together with the collective “Metrokoadroka”, will invoke the voice and the very particular world of one of the most important figures in the development of performance and action art.

In successive sessions we will also have the opportunity to review the relationships and influences that run through the work and thought of Ball, through talks given by art historians Trevor Stark (Canada) and Deborah Lewer (Scotland).

Trevor Stark will analyse the correspondence of the artist with the political scientist and philosopher Carl Schmitt (1888-1985). And the talk by Deborah Lewer will focus on the influence that the Catholic theologian Pseudo-Dionysius the Areopagite (5th-6th centuries AD) had on Hugo Ball and on his work as a writer and artist.

To close this programme, the artist and film-maker Jose Mari Zabala proposes an exercise of historical imagination from which to assemble the character of Hugo Ball with the figure of the poet Josean Artze (1939-2018) through a film essay produced expressly for these sessions.

We tend to consider language as a transparent and crystalline mechanism that makes it easier for us to relate to the world that surrounds us, avoiding its unlimited capacity to lose meaning. However, there are countless artists and philosophers who continue to demonstrate language’s capacity to become opaque and raise real clouds of smoke. Between the nineteenth and twentieth centuries, coinciding with the global crisis that affected European culture as a whole, various artistic currents and schools arose, ready to provoke, offend and overthrow the foundations of human language. It is difficult to make a definitive diagnosis of this period without taking into account the loss of confidence of these new generations in the capacity of the established language to account for their concerns.

The Smoke politics programme began in 2016 by invoking the prolific writer Karl Kraus(1874-1936), who is well-known for his arguments about the ‘narcotisation’ of language as the main literary feature of the industrial societies of the early twentieth century, a characteristic that implies a drastic reduction of the language to a set of exercises in which the functional and the utilitarian would prevail and that, according to the diagnosis of Kraus, was the main responsible for having led the western countries to confrontation in the war.

As we might expect, these authors who do not hesitate to express their rejection of language also feel a huge fascination for it, which causes many of them to carry out reflections in which communication is understood as a force with implications that go beyond the mere transmission of the contents. It is not surprising, therefore, that many of them are noted for asserting the importance of the sensual force of the word. From the Latin ut pictura poesis – recovered by Renaissance humanism – to the sound dimension of language, including the interest in Chinese calligraphy, there is a whole current of thought that, looking for a common denominator for all the arts, alludes again and again to the imaginative power of language.

Based on these approaches, the new Smoke politics season continues thinking about the importance of recovering the living word, even if doing so means, paradoxically, resorting to the anachronistic; that is to say, to the staging of authors who have become part of the majority – according to a formula that Agustín García Calvo (1926-2012) liked to use.