Making a Living + Kid auto races at Venice + The Champion 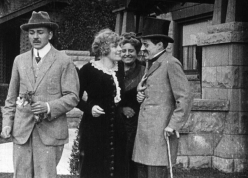 Making a living, Henry Lehrman, USA, 1914, 12’
Let’s go back to the very beginnings: this is Charlie Chaplin’s first film appearance, when he was not yet “The Tramp”, when the rules of what would later be known as silent comedy were still being defined; at the birth of slapstick, physical and knockabout humour, the gag, races and chases, etc. In this case, Chaplin pretends to be a reporter and the chaos typical his character soon ensues.

Kid auto races at Venice, Henry Lehrman, USA, 1914, 6’
Here we do see the first appearance of the “The Tramp”, the iconic vagabond created by Charlie Chaplin: his gestures, twitches, clothing, walking stick and sense of rhythm.

The Champion, Charles Chaplin, USA, 1915, 31'
If ballet and boxing ever had anything in common, Chaplin and his impossible moves in the ring demonstrate them here. It all begins when Chaplin the tramp and his dog find a horseshoe in the door to a gym and decide to try their luck in a fight against the champion Bob Uppercut.