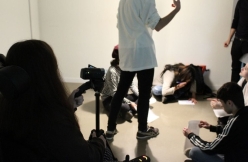 Rec: experimental cinema is a programme whose aim is working with the audio-visual as a tool for building and giving visibility to modes of self-representation. We have designed a series of sessions in which experimental cinema is the point of departure, with due recognition of the knowledge gained from and the uses to which image is put on a daily basis by young people, male and female.

The type of cinema that is labelled “experimental” brings together audio-visual examples deriving from common languages and narratives and providing other ways of doing things, where visibility is given to ideas and subjects far removed from stereotypes. Themes such as race, gender, sexual identity or ideology, blended together through non-conventional formats are, precisely, what we want to work on with the groups.

Given our intention in this edition to look more deeply into content, we have decided to schedule more sessions with the groups: starting with one viewing session, we shall then move on to recording, via mobile devices or cameras, before the final editing of material. The programme shall end with a final session for Screening and debate.