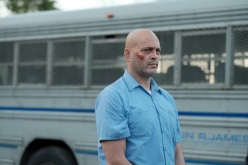 Dialogues with the 29th horror and fantasy film week.

This is a western horror film that turns the tables on many of the genre's conventions. It includes a cannibal tribe of Indians who look like zombies, there are touches of irony, brutal and gory scenes, twilight characters in search of their place in the world and a journey that takes on the form of an adventure.

Year 1850. A stranger comes to the town of Bright Hope and, after a dispute with the local authority, ends up in prison. Up until there, classicism at its purest: the saloon, the snow-capped mountains in the background, the horses, etc. That's when strange things begin to happen: the guy put in jail and the woman who is watching him disappear one night, and the only clue about their whereabouts is an arrow which seems to belong to a mysterious tribe. That's when the rescue mission begins: beyond the town’s borders and beyond the imaginable.