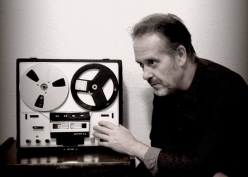 Miguel Angel Ruiz (O.G.)  is already an institution of innovative music, one of the pioneers of Hispanic electronic music in its most risky and underground version since the early 80s.  He has been a prominent figure of electronic counterculture during the last three decades in our country. His performances have featured at festivals and cultural spaces, crossing borders; among his collaborators and admirers we can find names such as Esplendor Geométrico, Francisco López, Asmus Tietchens, We Are The Hunters or Courbes Bézier, among many others.

He has released more than thirty works, many of them with his own cassette tape lable created in 1987 “Toracic Tapes”, and under different names (Orfeón Gagarín, Funeral Souvenir, Zoltan Coxis, Michel des Airlines, etc), which saw significant international promotion, to the extent of recording an LP for the label of German maestro AsmusTietchens. His albums “Encuentros en la Tercera Edad”, “Contestación Capilar”, “Coaxial” or “Han llegado los robots” already have cult status. His music is unique, bizarre, surreal, at once dark and fun, using a wide variety of styles in a highly personal and original way to create an amazing universe.

He has also collaborated with other musicians such as German Siegmar Fricke (with work released as Efficient Refineries), with prestigious Russian artist Cisfinitum under the name Codachrom (with one LP released), and is also a member of the Dekatron duo, making cosmic electronic music with young musician Ivan Sentionaut, with two LPs released.

Without a doubt, Orfeón Gagarin is probably the most well-known from among his projects.