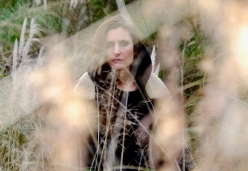 OKKRE is the new personal project of Uge Pañeda, composer and producer of the female duo LCC (Editions Mego), whose second album, Bastet, recorded and produced at EMS Stockholm, IAC Malmö and in her studio in Gijón, was released at the Sónar Festival as an A/V show with visual artist Pedro Maia and has been performed at other important festivals such as Atonal Berlín or Mutek México.

Later, Uge Pañeda, now own her own, explored the decontextualisation of the dynamics of clubs and techno music with choreographer Aimar Pérez Galí in the dance performance Épica, producing an unprecedented musical piece for a dance performance produced by Mercat de les Flors in collaboration with the Sónar Festival. The performance talks about how bodies are liberated through different electronic music patterns. The result has just been released on vinyl by the Modern Obscure Music label as OKKRE.

OKKRE represents an immersion in a creative process based on the coexistence of their different personalities and musical sensitivities, the polyhedron that includes several faces of the same figure in interaction with a variety of artistic expressions. She is currently researching and developing different projects such as Arkhé or "Landscapes Series". Arkhé is a project with a deep classical inspiration where the author combines two of her weaknesses, classical music and opera, with the theories of philosopher Heraclitus and with field recordings made in an old abandoned fluorite mine factory in Asturias and processed using software as a fundamental part of the composition of the work.

Before, she had produced several soundtracks for controversial documentaries with political and social content:  'Ciutat Morta', 'La Llucha', T'arajal', or 'Free: Hadijatou contra l’estat’. Some of them have received awards at prestigious events such as the Málaga or San Sebastián International Film Festivals.
She will soon publish her KBN Rmx which is part of Empty airport Rmxs by Chra through the prestigious Austrian label Editions Mego, alongside artists such as Fennesz. One of her compositions will also be part of the soundtrack for 'I hate New York' directed by Gustavo Sánchez and with renowned artists such as Arca, Ryuichi. Sakamoto, or Koreless, among others.