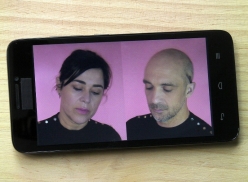 Notario (Encadenado) by Chico y Chica is a half-narrated, half-sung show which is based on the material from their album and book "Notario: Cuaderno de apreciaciones" (Chronicler: Notebook of appraisals) (Austrohúngaro 2016). It is a proposal that is somewhere between audio fiction, audio book and song read out loud.

Chico y Chica adapt their sound to a minimalist and domestic format, without programming or rhythms, inviting you on an uninterrupted audio excursion where they intersperse their songs with the narration of chapters from the "Notebook of appraisals by Raquel, the sensation of Callisto". It is a romantic science fiction story set in the future, which narrates the adventures of a space professional, who takes notes about her sensations on different missions and trips.

It is a unique, exciting and intimate journey towards an exterior space that is both extravagant and familiar: fraud planets, robot conflict, weddings, terror, romance, biodiversity, fitness, environmental conspiracy and miracles.