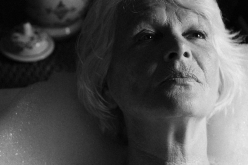 Mamoushka
My father died. One day he was fine and 6 months later he was dead. Caught a nasty thing in a hospital after a simple operation. My mother and father weren’t together for a long time, but they always stayed very close. Like all death, the world becomes smaller. Like all death your own mortality (e)immerge a little stronger. My mother had a hard time with her body, her skin, her breast aging, as most women do. I wanted to give her something, to give some strength, to show her how beautiful she is and give it back to her. I couldn’t film her for she’s to scared, so I used photography. We did this in 3 days. I took pictures, she talked, as to forget the camera. She told me stories I didn’t know, about her, about love, about me. And then I wrote this text. the hardest for her when she read it, was to record it, without tears. But we managed. I think of films as a gesture. Every gesture has consequences. To me the most important is that it gives something back. To the ones you make it with, and maybe to others. It did for her, it healed the pain a little, made her see herself differently, it might for others too. VM

Stephen Dwoskin was making his last film. He knew, after struggling his whole life, that this time the end was really coming. He had named his film ”AGE IS...” and that’s all he told us when he asked a few friend to send him a shot, a sound, a photograph, whatever we wanted, somehow like a farewell gift, that he would use or not in the film. This is what we sent.

Valérie Massadian had to work from a young age so she couldn’t study a cinema degree at the university. She worked as a photograph and that’s how she developed a strong vision regarding art direction. She has worked as an artistic director in known movies such as The Passenger or Story of Jen, both directed by François Rotger. In 2011, she debuted as a director with the film Nana and, in 2017, she did her second movie, Milla. Both of them were awarded in The Locarno Film Festival. Her work always focuses on female characters and how they relate to the world around them.