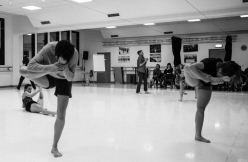 Presentation of the choreographic works created on the choreography residency with Edu Muruamendiaraz, Blanca Arrieta and the dancers from the Dantzaz company, as part of the Atalak 2.0 programme.

Edu Muruamendiaraz is a former dancer, choreographer and director at Aukeran, a company with which he has produced various performances including Bideak, Gernika, Burdina, Geltokia and Maurizia. Edu Muruamendiaraz’s career is closely linked to traditional Basque dance, a genre which he has blended with more contemporary styles and narratives to give a special stamp to his company.  DantzAmorfosis, his proposal for Atalak belongs to the same philosophy; the search for traditional roots and their revision through experimental language.

Blanca Arrieta trained in the London Contemporary Dance School / The Place and is the author of several works which have been exhibited in performance festivals across the world. She has focussed in this piece on synchronous movements. “My proposal for this laboratory residency”, explains Arrieta, “centres around the following question: How do we think physically? When we generate movement, we seek a space for form, for personal connections and for physical dialogues with other bodies. Body and mind connect to give meaning to the movement.” Starting from this idea, Arrieta creates a choreographic exercise which plays “with the simultaneous nature of actions or the coincidence of similar movements between two or more bodies in temporary alignment”.