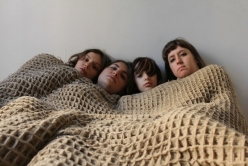 A film by Vladimir Durán

Colombian director Vladimir Durán usually cites Jaime Chávarri’s 1976 film El desencanto—a documentary about the Panero family and a well-known film amongst our audiences—as having influenced this, his first feature film. “It's what I wanted to develop: ways of thinking beyond all reason, and people who think differently from everyone else.”

Axel is ten years old and lives with his three sisters and his mother in an apartment in Buenos Aires. They celebrate birthdays, organise plays, listen to old music, argue and fight, invite friends to gatherings, watch old videos on the TV... everything that any family might do in their house of long hallways and infinite rooms. But there’s something strange about it all: Margarita, the mother, lives shut away in a room which she never leaves and which no one can enter. Her voice is all that can be heard occasionally through a small window which looks onto the bathroom, yet her ghostly and bizarre presence is enough for the matriarch to guide her family’s daily affairs and its destiny.

The film won Best Feature Film in the Vanguard and Gender Contest at the Buenos Aires International Festival of Independent Cinema.