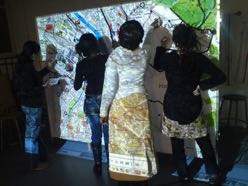 These visits represent a number of experimental visions of the exhibition with the aim of opening it up to new interpretations.

The idea is to provoke unexpected encounters in the halls and to people them thanks to the collaboration of artists, scientists, historians, designers, biologists, musicians... so that they offer their own particular approach to each exhibition.

Research and experimentation around voice, word, repetition and breath are common to the respective works of Ainara LeGardon and Itziar Okariz. For this experimental visit, Ainara LeGardon proposes a sonic performance in which she makes a personal inquiry into the musical side of some poetic texts, playing with their intelligibility and meaning.

On March 24th artist Itziar Okariz and curator Beatriz Herráez will show us the exhibition in a different way and from their own point of view.