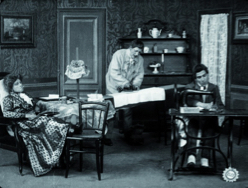 A filmic journey through the documents which, from a variety of perspectives, have given a cinematographic form to feminist debates during the second half of the 20th century and the start of the 21st.

The goal of the cycle is to offer a series of different works to create a particular and bidirectional panorama of the mutual influences between the critical discourses of feminism and film creation, as well as the role of audiovisual activism in the interpretation and dissemination of their ideas. Political commitment and positioning in some of the films, critical tension in relation to systems of institutional representation in others; all in all, creations open to radicalness and formal and ideological courage.

This session consists of a filmic journey focused on the emergence of the complicity between filmmakers and post-suffragist feminist movements. Intentionally declaratory works that at the same time have a performative intent, becoming artistic actions which assume a political responsibility with a clear position in relation to feminist practices and an explicit intent to influence.

The 1960s and 70s were particularly fruitful for these types of productions and have left us revealing testimonies of a genealogy of creations that describe the period through visual experimentation, pushing stylistic boundaries regarding how conventions are represented and the conflicts of gender and sex that political feminism laid bare.

The programme starts with one of the first documents (fiction) that cinema offered, in 1906, by filmmaker Alice Guy, about the dangers of "equality".

Alice Guy ridicules gender roles in this short film that features men who respond to feminine stereotypes and women who behave according to the canons of masculinity.

The first cinematographic work by producer Chantal Akerman where she explores one of the paths that was most transited later in her filmography; what the meaning of order is and the appearance of disorder in the bodies and spaces affected by desires.

1975: the year of the wave. A French television station asks seven female directors to respond to the question "What is a woman?" in seven minutes. This is the cinematographic response by Agnès Varda.

With the book in her hand, Delphine Seyrig dictates the words of Valerie Solanas in SCUM Manifesto to Carole Roussopoulos, while the filmmaker types them. The television, in the background, shows images of war broadcast on that day's news bulletin.

In this ingenious film, Greta Garbo and Marlene Dietrich become virtual lovers thanks to the editing by Cecilia Barriga who, by combining fragments of some of the films featuring the actresses (Queen Christina, Anna Karenina, Blonde Venus, etc.) build a special narration about desire and destiny.

The first part of a trilogy about this character created by Reeder, White Trash Girl. The devil inside reveals the personal story of this superheroine.