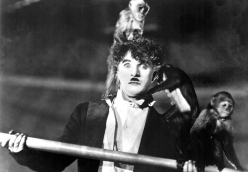 A film by Charles Chaplin

It all starts with a race; what else could we expect from a silent comedy by the great Charlie Chaplin. In this case, Chaplin is mistaken for a pickpocket at a circus midway, and with this incident the spectacle begins: Chaplin in the house of horror. Chaplin on the attractions. Chaplin pretending to be an automaton. Chaplin becoming the big success of the circus by mistake. Chaplin the magician. Chaplin the tightrope walker. Chaplin in the lion's cage. Chaplin pursued by a donkey. Chaplin falling in love. Chaplin risking his life at a height of thirty metres…

Do you remember that legendary scene from The Lady From Shanghai (Orson Welles, 1947) In which Rita Hayworth multiplies her image a thousandfold in a mirror to escape a tragic destiny? Well, twenty years earlier, Chaplin gave us one of his funniest sequences by placing a policeman and Chaplin himself in the hall of mirrors. And so this film goes on, from one great sketch to another, with evil characters who are very evil, good characters who are very good, impossible love stories and unforgettable moments of laughter.

We want children and adults alike to come and see this film. You'll love it and there will be much laughter. For many it will be the first time they see the great Chaplin on the big screen, a unique moment. For the rest, it will be a reencounter, because Chaplin is already part of our sentimental and cinephile memories.

This film received four Oscar nominations: best film, best director, best actor and best script. But in the end the Academy decided to award Charles Chaplin an honorary Oscar for acting in, writing, directing and producing The Circus. Therefore, a fantastic film, zinemaraaa!