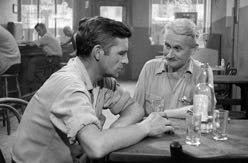 Independent American film owes much to documentary photographic tradition, which is where everything started: the portrayal of the country's poor areas, the industry and country workers, the night-time in the city, the sad gaze into the camera, life on the streets… After the Wall Street Crash of 1929, the president at the time, Roosevelt, as part of his New Deal economic recovery project, set up a national documentary registry programme in which the country's most important photographers would portray "how the people raised themselves from poverty". But the result, signed by authors who are so important in the history of art such as Walker Evans, Dorothea Lange, Carl Mydans, Arthur Rothstein, Jack Delano or Marion Post, was precisely the opposite, as what they recorded was a choral portrayal of the misery and devastation of an America that had lost its place in the world.

It is in this context that we can fully understand a film such as the one by Lionel Rogosin. This historical moment and its consequences is also the link between the work by this filmmaker and the work by photographer Berenice Abbott (present these days at the Artegunea exhibition by Kutxa), in particular during the period that recorded the changes that took place during the 1930s in the country's larger cities.

Bowery is the name of a street in New York, in lower Manhattan, between Chinatown and Little Italy. The film, a docufiction, chronicles three days with the main character, Ray, an alcoholic railway worker who tries to keep his job and his dignity, but who loses himself time and again in the local bars. The result is a devastating portrayal of an addiction, of a crisis, of hundreds of anonymous faces, of a historical moment and of a city which, as shown in the film, disappeared forever, swept away by demolitions and progress.

Along with the documentalists mentioned above, the film is strongly influenced by the work of master documentalist Robert Flaherty and by Italian neo-realism. The intention in any event was to turn the camera towards reality and to capture what was real, directly; this was the start of new American film.

Using the opportunity of the photographic exhibition by Berenice Abbott, between January and March we will screen three films (The Quiet One, Sidney Meyers, 1948 and Little Fugitive, Ray Ashley, Morris Engel, Ruth Orkin, 1953) which dialogue with those images and which share a historical moment and a reflection on the documentary awareness of a generation that took on the responsibility of portraying a country and its people.

We finish this presentation with the awards: On the Bowery won the Grand Prize in the Documentary and short film Category at the Venice Film Festival and was nominated for a Best Documentary Academy Award.