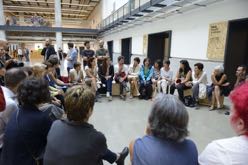 Mariló Fernández (LaFundició) will present a small programme of two sessions open to the public in which we will be invited to think about what it means to reactivate memories and stories traditionally regarded as being of lesser importance. Independent writer and researcher Jorge Blasco will take part in the programme, along with Archiveras, a working group comprising the mediation team and former employees of Tabakalera.
The work experiences carried out in LaFundició, a cooperative which she has been a member of since its creation, reflect an interest in starting up processes for the collective construction of knowledge. Spaces are created in which the reactivation of the story generates a kind of critical rereading of the past that has the capacity to affect and create tension in the official narratives.
Memory is a land of conflict, traversed and striated by controversies about past events and by the way in which these explain our present. In other words, memory is a complex, multidimensional territory. From a patrimonialist and custodialist perspective, remembrance policies have tended to cancel out conflict — either imposing a unique and irrefutable memory which ties up controversies about the past, or invoking a neutrality which cuts short the debate and the antagonistic contrast between diverse memories. Traditional remembrance devices, particularly monuments, work in this way.

1. Creating spaces for meeting, dialogue and participation in relation to diverse memories.

2. Restitution and return to the public sphere of memories belonging to groups which have been subordinated by dominant narratives.

3. Activation of memory in the present. That is, its link with current needs around self-representation and recognition of social and grassroots movements, in order to better consider their current circumstances and to create new social ties — understanding memory not as a fixed point of identity reference, but as a pretext capable of catalysing conversations and meetings between diverse individuals and groups.

This project tries not only to represent those ‘other memories’, but to restore representative devices and operative rationales belonging to subjects and social groups which have been subordinated by hegemonic narratives. For these memories to be emancipatory, it’s not enough to preserve documents, objects or practices within the dominant institutional frameworks. We must crack open these frameworks and update the worldviews, landscapes, institutional forms and communities in which they sat and within which they made sense.