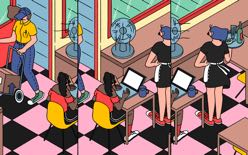 Introductory workshop for the creation of vignettes

There is nothing better than the words of Conxita Herrero herself to encourage you to participate in the workshop:

“I remember when I believed that I was not a comics artist, because I had never drawn any comics. Because of my somewhat unconscious nature, one day, without giving it much thought, not many years ago, I must have come undone… and I sat in a chair and drew the first comic of my life. It was three pages long and was about a girl who got pregnant from an onion. Time passed, and the girl gave birth to an onion. The doctors who were taking care of her were scared and killed the baby onion by cutting it in half. The girl wept for the loss, and the doctors also wept – because when you cut an onion, you weep.

I remember that, before drawing it, the only thing I had was the idea for the story, a few sheets of paper, some markers, a table, a chair, and two hands. After it was drawn, I had the same things, plus a short story drawn out in the form of a comic. I guess I must have decided that all this hadn't been too difficult to swallow, and that I had –more or less– accomplished my initial goal, which was to draw a comic.

From that time forward, a few more stories occurred to me and I started repeating the same procedure. As time went by, I learned some things, I faced new problems, and I gradually discovered new solutions to solve them. I imagine you could say that, as time went by, I was becoming more and more the comics artist.

Now, after some years, it is assumed that I am so much a comics artist that I can go to a place and give a workshop on how to make them. Someone has validated me to do that… and the world is a really strange place. The thing is that I, in reality, am still a bit like at the beginning: I still only have the ideas for some stories, a few sheets of paper, some markers, a table, a chair, and two hands. The fear –of not know how to do it, of not knowing how to put my narrative to paper, of not being sure if what I have to say will be of interest to someone or not– has not gone away; it’s exactly the same as that first day when I still had not drawn a single comic in my life. I would imagine that anyone who decides to come to the workshop is probably in a similar situation to mine, to the situation I was in back then and the one I'm in now; and, since fear is a bitch –always– that person has probably decided to come to the workshop to try to get rid of those fears a little. Speaking for myself, I have the whole bit about fear quite fresh in my mind; I mean, I face it a thousand times every day. I think that I have experience in this – and that’s something about which I can converse and try to generate solutions: just as I'm saying that I have a lot of fear, I will also tell you that, luckily, I find a lot of solutions to that fear.  And that's what we'll try to do in the workshop: find solutions (stylistic, narrative, formal, made-up, etc.)… and get a little bit away from that fear of drawing comics.”