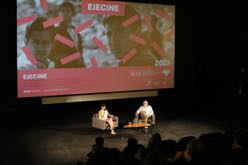 The XVI edition of the Meeting, to take place between September 25 and 29 at Tabakalera, will include masterclasses by Raymond Depardon and Claudine Nougaret, Todd Haynes and Christine Vachon, Marine Francen, Nobuhiro Suwa and José Luis Torres Leiva, who will also chair the jury

The XVI International Film Students Meeting, to take place from September 25 to 29, in the framework of the 65th edition of the San Sebastian Festival, has selected, from the 209 works submitted by 110 schools in 45 countries, fourteen short films from Argentina, Belgium, Croatia, Czech Republic, France, Germany, Israel, Mexico, Portugal, Russia, Spain and the USA.

The masterclasses, including screenings of works by the filmmakers and conversations with the film team, are sessions reserved for students and a limited number of spectators, who can attend by registering on the Tabakalera website

The Meeting, organised by the San Sebastian Festival and Tabakalera - International Centre for Contemporary Culture, has the objective of presenting the work of students from film schools all over the world, the next generation of filmmakers. This year, the section grows both in duration - with an extra day, bringing it up to five - and ambition, reflecting the strong commitment of its organisers. The event also comes with a suggestive programme of activities including the visit of outstanding film industry professionals who will present their films in San Sebastian, such as Todd Haynes and Christine Vachon (Wonderstruck in Pearls), Raymond Depardon and Claudine Nougaret (12 jours / 12 Days in Zabaltegi-Tabakalera), José Luis Torres Leiva (El sueño de Ana / Ana’s Dream  in Zabaltegi-Tabakalera), Marine Francen (Le Semeur / The Sower in New Directors) and Nobuhiro Suwa (Le lion est mort ce soir / The Lion Sleeps Tonight in the Official Selection). The Chilean filmmaker will also chair the Jury of the XVI Film Students Meeting.

Both the screenings of the selected short films and the masterclasses will take place in the Tabakalera cinema. The masterclasses, including screenings of works by the filmmakers and conversations with the film team, are sessions reserved for students and a limited number of spectators, who can attend by registering on the Tabakalera website (August 28 onwards), and accredited Festival guests, through invitations, while the tickets for the different short film showings can be acquired through the regular San Sebastian Festival sales channels.

The Cultural Director of Tabakalera, Ane Rodríguez Armendariz, underlined the importance of projects of this kind being able to develop in the framework of an event such as the Festival and in the context of a centre like Tabakalera, whose cultural project is “firmly committed to new creators”.

A jury made up of students, chaired by a teacher and selected by the Orona Fundazioa will give the Orona Award with 5,000 euros.

Furthermore, a specific jury made up of students from the participating schools and chaired by the Chilean filmmaker José Luis Torres Leiva will decide to which filmmaker it will give the Panavision Award, carrying a complete camera package including a RED Epic camera and Primo standard lenses for four weeks of filming, or a voucher worth €10,000 for renting any kind of Panavision material.

The International Film Students Meeting is part of the legacy of San Sebastian 2016, European Capital of Culture.