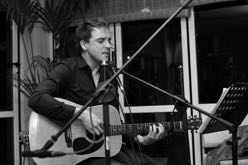 Kutxa Kultur, the platform for local amateur talent in music, art, fashion, theatre, dance and more, is delighted to offer Kutxa Kultur gauak, an activity on Saturdays in August aimed at anyone who wishes to spend a couple of magical and talentfilled hours with us in a relaxing 20:30 setting. Come along!

Iñigo Serrulla, selected for the 2017/18 Kutxa Kultur Musika residency programme, is a 21-year-old singer-songwriter from San Sebastián who got his first guitar in his last year of high school and proceeded to write his first songs. He has a talent for intimate and inspiring songs with diverse influences, and is currently putting together his first awaited EP.

After working with the groups Utikan and Hamaika Bide, in 2004 Iker Lauroba founded Lauroba along with his brother Haritz. The band has enjoyed much success and released several records. In 2015 he published his first solo record, Zeru tolesgarria, a project in which he put Harkaitz Cano’s lyrics to music and collaborated with more than 20 musicians. This year he published Nire gotorlekutik, his second solo work.