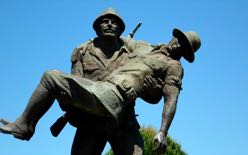 Now, what am I going to do with my eyes? Effectively, that is the fundamental ethical question after violence occurs. From now on, how do we see, remember, and recount in a way that recognises victims, delegitimises violence, and allows for a horizon of coexistence to be established?

This intellectual workshop seted out to revisit the 20th century through some of its traumatic conflicts. To did this, we took note of how these events have been depicted in film.

The workshop's backbone was comprised of three central concepts: aesthetics, recollection, and identity. Starting from quotes from major filmmakers, we viewed fragments of films, analysed their content and structure, and made connections to the reflections of important thinkers. We also watched films with a poetic and experimental narrative around recollection. In order to complete and close the circle, we had reflected on the identity of the 'other', the wall that separates us, and we analysed processes of integration.

Participants became familiar with the world of cinema and contemporary thought while tackling a documentary audiovisual project: a portrayal of the 'other'.