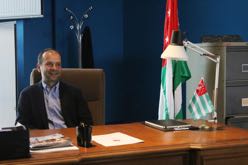 As part of the programme "The Secession Sessions"

This conversation was part of the programme The Secession Sessions of Eric Baudelaire's exhibition The Musicof Ramón Raquello and his Orquestra.

In the middle of this conversation were the independence of Abjasia and its actual situation like a country without the international recognition. Abajasia is a big paradox that generates a lot of questions. It's an existing country after the war 1992-1993 where it was separated from Georgia and it has its goverment, its flag, its borders, its language... But i hasn't got the legal recognition of the international community. For that, it finds itself in a situation where it does exist without existing.

The conversation took this paradoxic situation as a starting point: How is a country built? When is a country considerate real? If all states can be considerated ficticious construct, can we say that Abjasia is a fiction inside another fiction?

The sesion was in basque and english with simultaneous traduction in both languages.