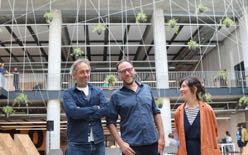 Conceived by artist Jerónimo Hagerman, the installation was comprised of a hanging garden with 45 plants that were connected with ropes to evoke the tangle of a ship's lines.

This project was developed in collaboration with architect Jon Begiristain, and is sponsored by the U.T.E. Giroa-Veolia and Ondoan.

On June 16th, Malas madres / Lives hanging by a string was inaugurated. It is the first of the artistic interventions that will occupy different spaces at Tabakalera. Conceived by artist Jerónimo Hagerman, this installation is comprised of a framework that catches our eye as soon as we enter into Tabakalera's plaza.

Hagerman has adapted his project to Tabakalera's spatial conditions. The rows of balconies, with their varying heights, were used to create a hanging garden of 45 plants that are connected with ropes to evoke the tangle of a ship's lines.

In order to connect ourselves with other living beings, we tend to humanise them, just as occurs when naming pets, fictional characters, or plants. Popularly known in Spain as 'cintas' ('ribbons'), the plants that Hagerman used in his piece are called 'malas madres' ('bad mothers') in Mexico because they push their sprouts out of the nest.

Malas madres / Lives hanging by a string seeks to gain other perspectives of the building: according to the author, feeling vertigo when we observe another living being that is suspended from such heights warns us of our own fragile vital state, anchored to the earth's surface. The relationship between human and non-human nature suggests to us the scale that we occupy with respect to the rest of the universe.

This artistic intervention, which was developed in collaboration with architect Jon Begiristain and is sponsored by the U.T.E. Giroa-Veolia and Ondoan, can be visited at Tabakalera for the next three years.

THE FIRST IN A SERIES OF ARTISTIC INTERVENTIONS

Malas madres / Lives hanging by a string constitutes the first in a series of artistic interventions that had occupied Tabakalera's various spaces over the coming years, with two interventions being presented each year. This programme’s aim was to create a dialogue among different artists with the building being the only place in which these interventions occur.

Jerónimo Hagerman (Mexico City, 1967) lives and works between Mexico City and Barcelona. His research has focused on analysing the ways in which human beings and nature relate to each other, with the purpose of inviting us to reflect on our position as just another component in the natural universe.