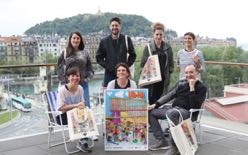 Summertime at the Attic

The terrace was opened from Thursday to Sunday and host the second annual Ud-ha – programming which included the performing arts, cinema, music, and local open-air events.

Cooperation with La Casa Encendida and with Kutxa Kultur were two new features for that year, while support such as that received from San Miguel should had remained another year after the positive results yielded by Ud-ha in 2016.

Ud-ha Attic 2017 was presented that morning in a press conference by Ane Rodríguez Armendariz, the Director of Culture at Tabakalera, Víctor Iriarte, the person in charge of the center's audiovisual program, Onitza Urbieta, the Coordinator of Kutxa Kultur, Maia Villot, Curator, and Lucía Casani and Andrés Noarbe, Director and Concert Scheduler at La Casa Encendida, respectively.

Next day –Saturday– the first day of the month, Tabakalera's Rooftop Terrace was filled with parasols, folding chairs, and cool drinks to set the mood during the summer nights of July and August. Additionally, the terrace was hosted the second annual Ud-ha – programming which had included the performing arts, cinema, music, and local open-air events. Last year (during the first annual edition) the programming lineup was very well received by the general public.

New this Year: Cooperation with La Casa Encendida of Madrid and Kutxa Kultur

Live music was especially prominent in Ud-ha programming. Therefore, the 2017 edition was backed up by the cooperation of La Casa Encendida of Madrid during the month of July and Kutxa Kultur in August.

La Casa Encendida's Terraza Magnética was set the mood during the evenings of July, and the fact of the matter was that said social and cultural center of Madrid had shared with Tabakalera the musical delights that was also played on its own terrace that summer – pieces that were experimental and electronic in nature.

Thus, every Saturday from July 1 to July 29, starting at 8:30 PM, national and international DJs had played live at Ud-ha. That included names such as Introducing the Pleasure Dreams & Suso Saiz, Kyoka, Schlampeitziger, DJ Marcelle, and José Rico.

Once August had arrived –and during the same Saturday evening schedule– the Kutxa Kultur Gauak Program took over. That had included amateur programming proposed by locals such as Iñigo Serrulla and Iker Lauroba (two individuals who had brought music to the table), as well as Sara Mansilla and Pet Fennec. The Compagnie des Vents et Marees and Manuel Espinazo had likewise put on a visual humor show entitled "Al final de la playa" ("At the End of the Beach").

Scheduling for the performing arts and cinema exhibitions were the responsibility of two guest curators, Maia Villot and Chiara Marañón, respectively. The events they had organized were extended throughout Ud-ha programming during the months of July and August.

Likewise, Chiara Marañón proposed, for the Fridays of the summer, the Let's Roll Cycle. For this cycle, the filmmaker and curator had chosen seven road movies by directors such as Ida Lupino, Bruno Dumont, Dominga Sotomayor, John Carpenter, D.A Pennebaker, Abbas Kiarostami, and Fernando Eimbcke.

Thus, open-air cinema and road-related stories were the main players beginning on July 14 and ending on August 25, with events starting at 10:15 PM.

This year's poster design was the responsibility of the illustrator and filmmaker Ainize Sarasola.

Ainize, born in Orio, received her degree in Fine Arts in 2008 from the University of the Basque Country and she currently resides in Berlin. In recent years, her work has focused on experimental cinema and also, since 2011, she has self-edited the drawing fanzine entitled Orly Magazine. Additionally, she is currently undertaking a new artistic project at the Artist's Space of the International Center for Contemporary Culture.