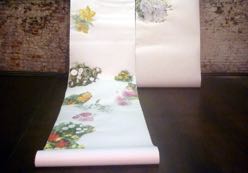 Infinite, without borders, you can hold it wherever you want, it is easy to apprehend, its presence is obvious.

I would like to cover the entire ground with velvet, pale pink velvet. Not today's velvet, but that old velvet that was used to make skirts or upholster

armchairs. A particular quality, a higher density of the fabric's fur. Each hair has more consistency, so when you stroke it with the palm of your hand first there is a kind of global resistance of the hairs, as if they were all in agreement and could act in synergy.

Once that first moment of resistance yields to the intention of my hand, that same totality and synergy of the hairs accompanies and reaffirms the direction in which I move the palm of my hand.

I dedicate this piece to my mother and to Paco.