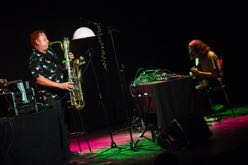 La Terraza Magnética launched its programme in Tabakalera with a stunning collaboration between two great legends of electronic music in Spain.

In the 1980s Suso Saiz was part of Orquesta de las Nubes and Música Esporádica, amongst other projects. He studied contemporary composition with Luis de Pablo, and has performed with musicians as diverse as Jorge Reyes, Steve Roach, Salif Keita, Diego Vasallo, Jan Bang, and Christian Fennesz. He has created innumerable works for film, theatre and dance, and has produced an unfathomable list of records.

Along with Saiz came the Huesca native and godfather of Spanish chill out Justo Bagüeste, with his project I.P.D. Between 1995 and 2003 he released four albums and returned to the stage last year (Periferias Festival) following a long hiatus. He has been a member of such legendary groups as Clónicos and Los Chatarreros de Sangre y Cielo (from Javier Corcobado), amongst others.