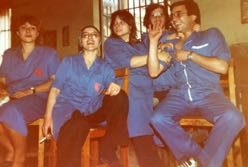 Brødre (Hermanos), Aslaug Holm, Norway, 2015, 102’, OV with Spanish subtitles, DCP Richard Linklater’s Boyhood (2014) represented a true turning point in dealing with the passage from childhood to youth over the years, in film terms. It’s not the only example, though, and its release and success drove us to look back into history for similar examples. Can cinema really capture those unique moments in the passage from adolescence to adulthood? We have programmed works such as The Up Series (1964-2005), by Paul Almond and Michael Apted, to The Apu Trilogy, (1955-1960), by Indian director, Satyajit Ray. Marcos and Lucas are brothers, children of Norwegian filmmaker, Aslaug Holm. Marcos and Lucas grow, change, and live and experience things for the first time in front the family camera, which observes and films them over the course of eight years. The result is a very special Norwegian Boyhood, in documentary form, where mother-director is also part of the cast. “Film as close as possible…” That is what Aslaug Holm set out to do from the beginning of the project. “A river, a school, a newspaper kiosk, a football pitch, a schoolyard…Spaces that contain life,” she says, outlining her outlook. And she starts filming: the Sagene district of Oslo, in 2007, Lucas’ first day of school. What comes after that is an intimate homing-in on those years of upbringing, the dreams and expectations of her children. As well as reflections from our director on the value of cinema and memory. “Is it possible to store and register all of that? What will we remember when time passes?” she wonders. She also asks her two children, but they don’t want to answer; they are tired of their mother following them around everywhere with a camera. They have other worries and concerns, which perhaps best sum up those years of such huge changes and infinite possibilities. Am I good at football? Does the rock group I’ve formed with my friends sound good? Will I have the courage to jump from this height into the lake? What will they say when they find out I want to wear an earring?