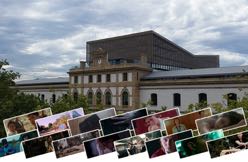 Screening of the winning shorts

An accidental meeting in an elevator at a department store pushes two older women to their limits and forces them to improvise when the elevator gets stuck.

Axelle, a promising young tennis player, becomes increasingly desperate on discovering that Jeremy, her attentive coach, has been taken in for questioning.

After eleven years of absence, Ernest returns to the town that saw him grow up and is reunited with his closest childhood friends. Among local anecdotes and hazy memories of the past, Ernest will discover that he is tied to a place and a past he thought he’d forgotten.

A quien corresponda / To whom may concern

Valeria Fernández, Argentina, 2016, 9', OV in spanish with subtitles in English

A tale of a specific instant, a letter addressed to whomever wants to read it. A quien corresponda (To whom it may concern) narrates the moment the director’s mother died.