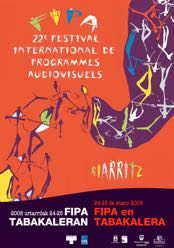 Program of the FIPA at Tabakalera:

The inhabitants of a Chinese town, called Da Fen, duplicate manually, and at unequal prices, paintings of the great Western masters. The film analyzes the idea of “copying” within Chinese culture.

The works of the Swiss artist Markus Raetz are amazing. They challenge our habits of observation and look around from a new point of view. A personal portrait of the world and of the person behind the work.

The film focuses on the years Melville spent in the French Army during the Second World War. It includes interviews with other directors, little-known images of Melville and fragments of his films.

Out of competition – European creation Claudia Willke · Germany · Digital Betacam 16/9 · PAL · Color · 52’ · 2007 · Original version with subtitles in Spanish The film features the power and influence that Christian fundamentalists have in the USA. Their main purpose is to build a Christian nation governed by the Bible.