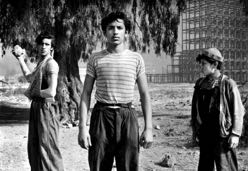 Let’s start by saying that this is a Buñuel, like when you say “This is a Picasso, this is a Velázquez, this is a Goya”. We’re talking about Buñuel in his Mexican period, during his exile, when he was close to quitting film definitively after the failure of Gran Casino (1946). But after the fall came the rise, sometimes film –and life– is like that, and after the box office success of The Great Madcap (1949), Buñuel was able to at last film one of his trademark stories: dark, direct and brimming with his particular visual imagery.

Pedro and Jaibo are two adolescents in a poor neighbourhood of Mexico City. Small-time delinquents, wild, those that are in and out of youth detention centres, those with a shine in their eyes. The ‘quinqui’ film genre of Jose Antonio de la Loma, Eloy de la Iglesia or the first Saura had not yet been invented, but Buñuel was already doing it in 1950. What did exist was Italian neorealism, from which Buñuel took that documentary and direct perspective of the streets. The result is a cruel portrait of misery and youth. So cruel, that when it was first screened in Mexico, nationalists wanted to expel the director from the country and the film was removed from cinemas four days later. And then the Cannes Film Festival came to fix everything: after its presentation, Buñuel received the best director's award and the French press rediscovered the genius from Calanda. And if France applauded, Mexico could not stay behind, sometimes life is such: the film was relaunched with great success and was on the billboard for more than two months.

The film is part of the UNESCO's Memory of the world archive. The film sounds tormented and disturbing with the music by Rodolfo Halffter of pieces by Gustavo Pittaluga. The film is full of chickens. The film has a dream sequence that is part of the Great history of film. The film kicks off the new course on The atomic age, our particular review of the imaginary scenarios of infancy, adolescence and youth in the history of film.

Best direction at the Cannes film Festival of 1951.