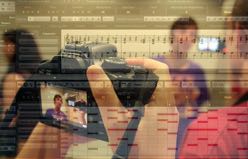 In this workshop we are going to create a teaser trailer. The teaser is for an audiovisual presentation that has yet to be unveiled. After writing the script we will create the soundtrack and later incorporate the desired images. Will you succeed in creating a one-minute video that generates intrigue?

- Introduction and reference material: What are we going to do? What is a teaser? What differentiates it from a trailer?

- How to write a script.

- Analysing the script we have written.

- Soundtrack lecture: adding different soundtracks and analysing them against one another; learning about free soundbanks and sound effects.

- Continuing with the soundtrack composition.

- Analysis of the soundtrack created and drawing conclusions.

- Introduction to the main tools in the image editing software.

- Presentation of the work.

- Analysis of the results between the participants and facilitators.