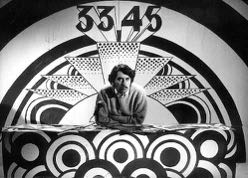 Open air cinema in the Attic

Cinemas outside the cinema: in the village square, in the park, in the forest, beside the sea, in a boat, in a Russian train, in the bus, in the cellphone screen, in a transatlantic airplane, in the Mojave desert, in a fronton, in the jungle, in the edge of a lake, in the Attic of Tabakalera, in the framework of UD-HA! programme. We are opening our open air cinema in San Sebastian, summer cinema, outside cinema, cinema from 22:00 on, during July and August, opencast.

By one hand, between July 8 and 10, connecting with our summer's exhibition by Yto Barrada, we have invited the Cinémathèque of Tanger to programme a series of Cartes Blanches.

On the other hand, every Friday fron July 22 and August 26, we have programmed a series called Last cry!, plenty of music, dances and songs and in their original version: Office by Johnnie To, Una jolie vallée by Gaël Lépingle, Phantom of the Paradise by Brian de Palma, among others.

When we first started thinking about the summer, this season was going to be called Cinturón negro de karaoke [Black Belt in Karaoke], in memory of the album by Javier Krahe. Then, we thought we might call it Último Grito [Last Cry], in tribute to the musical and television facet of our beloved Ivan Zulueta, because this was the title of the musical program of TVE where he worked in the late seventies.

But in the end, whatever it's called, we think our reasons for scheduling these films during July and August is obvious – we want music, we want singing and we want dancing at the launch of our open-air cinema in San Sebastian. Music and cinema, yes, but with our own special approach to programming. Is it possible to make a film on capitalist corruption in which the executives sing? Or a pastoral and choral adaptation of The Three Musketeers? Or a glam-rock remake of The Phantom of the Opera?

This is one of those things that are about not to happen and that finally happen and fireworks sound in the back: we've been months looking for the RTVE archives of the program Último Grito where Iván Zulueta worked. But, sometimes, this kind of managements  are labyrinths and it wasn't easy to sort out the issues about the rights, the location of the old tapes and the descense to the basement where the audiovisual legacy of the public tv is locked. But we got it and now we can announce that the muscial season of the summer will begin where we wanted to begin it: with the images, drawings and sounds of the cultural-pop-musical magazine that Iván Zulueta directed between the years 1969 and 1970. This is Último Grito, once again in the screens, without end, countdown while the lights turn off and the shout of Tarzán Johnny Weissmüller will take the attics of Donosti: Aaaaaa, Aaaaaaaaaa!

"'Modern, at last…!' was how one contemporary account reacted to the launch of Último grito (1968-1970) on Televisión Española's second channel, UHF. It was May 1968, and the new arts review set out to cover the latest international developments in cinema, art, music and other trend-setting events. Nearly fifty years later, the programme has taken on an almost mythical dimension, going down in history as Iván Zulueta’s first professional work and one of the first programmes to consciously experiment with the video-clip format. It would be no exaggeration to say that Último grito is essential viewing for anyone with an interest in the dissemination and consumption of ground-breaking aesthetics in Spain.

Speaking some years ago, José María Íñigo –who presented Último grito with Texan Judy Stephen– recalled that many of the programme's aesthetic decisions were taken “simply to irritate, as a call for attention”. In this way, Último grito tried to break some of the moulds of Francoist society, in thematic and aesthetic terms. With an irregular showing in TVE’s night-time schedule (close to midnight on Tuesdays and Thursdays and off the air from February to December 1969) at a time when the channel could only be picked up in a few urban nuclei in Spain, the programme reported in unorthodox fashion on cultural developments such as pop art, psychedelia, surfing and comics. It included some very visually elaborate pieces, which used editing, optical distortion and animation as backing for a range of songs and artists, from Frank Zappa to T. Rex.

The opening credits set the tone for the rest of the show. Drawn in clear, clean strokes by Zulueta himself, we see (and hear) Tarzan yelling. This is intercut with pictures of the King of the Jungle and Sean Connery as James Bond, looking seductively at the camera as he fires his gun. Jane Fonda enters the scene dressed as Barbarella, followed by a great comic-book BANG! and the sound of a shot. From there on, to the backing of Tony Newman's “Let the Good Times Roll”, there follows a succession of images, including Popeye, Little Lulu and Lon Chaney dressed as the Phantom of the Opera from the 1925 movie. This audio-visual journey, a Molotov cocktail of western folk culture perfectly summed up the spirit and contents of Último grito.

Initially devised by Bilbao director Pedro Olea, Iván Zulueta (from Donostia / San Sebastian) took over the show from the second episode. Zulueta shared the director's chair with two other 20-somethings who had studied with him at the Official Film School: Ramón Gómez Redondo and Antonio Drove. Together, the three were in charge of turning out the 25-minute weekly programme, filmed on celluloid, on a shoestring budget. Zulueta and his companions have famously discussed this lack of funds, explaining the extreme visual lengths they had to go to in order to solve the problem that they had no funds to invite foreign bands to play on the programme. The directors came up with some ingenious solutions, some of which have gone down in Spanish audio-visual history, such as Zulueta's animated version of the Beatles' “Get Back”.

Between May 1968 and January 1970 forty-five episodes of Último grito were broadcast. Today only five still survive in the Televisión Española archive. The screening at Tabakalera is a magnificent and rare opportunity to see this ground-breaking programme for yourself. The unique setting, on an open-air summer terrace, will help emphasise the unorthodoxy of Último grito and its legacy in contemporary culture. No doubt the creators would be happy to share with you some of the great moments, such the free adaptation of Hans Christian Andersen's story “The Little Match Girl versus Papa Noel” (with Carmen Santonja, later a member of Vainica Doble, in the role of the match girl) and their essential parody of films of the time, including the sketch “The marrullera”, a humorous take on Carlos Saura’s La Madriguera (1969). Enjoy."