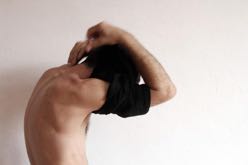 One proposal of Isaak Erdoiza

In the base of eroticism we have the experience of a snap, of a violence in the moment of the explosion.

Saturar la erótica is an act of resistance. As my starting point, I take a story that wavers across the border between autobiography and fiction, generating questions that I use as a mechanism for de-activating a state of immobility that has gradually installed itself with the passing of time.