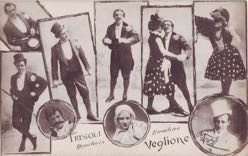 A performance by Quim Pujol

Thanks: María and Cuqui Jerez. With the support of the programme Artists in Residence by CA2M and La Casa Encendida.

Leopoldo Fregoli was one of the most important quick-change artists in history. In his shows he would change appearance at a frenetic pace, embodying dozens of characters in the same performance.

The critic Sebastià Gasch wrote about him: “Fregoli poses as more than a thousand characters of all kinds, types and species (…) Fregoli marked the emergence of the first intuitions of the great themes of our age, brought to the stage”.

What can we still learn from Fregoli? In this series of quick-change numbers, the performer never changes appearance.