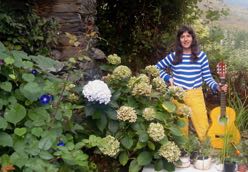 They say that our human ancestors' first musical compositions involved reproducing of natural sounds using manufactured devices. A peal of thunder, the flowing of a river or the cawing of a bird. Everyone understood it because it appealed to something they had already heard, sounds that shocked, delighted or just disturbed them. The traditional aspect of Lorena Álvarez is not the reproduction of a specific folklore, but the capacity to share that essence of the natural from her songs through contemporary forms.

Following the release of La Cinta (Sones, 2011), her first LP  Anónimo (Sones, 2012) and the EP Dinamita (Producciones Doradas, 2014) she has managed to go beyond the common limits of traditional music to a new context in which contemporaneity and tradition can go hand in hand without complexes, where town and city come together, travelling paths that until now had become overgrown.

Her songs mix traditional instruments and sounds with airs that are closer to contemporary pop. In them she tells common stories, and for this reason her discs and concerts trap, entertain and move young and old alike, who see in her music a sincere reference to the small dramas and joys that make up our lives. Cunning, shrewdness, humour and simplicity for a new collection of popular songs, so sorely needed.