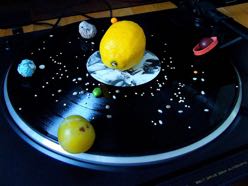 A performance by Cris Blanco

In the quantum world, all possible situations are said to be taking place at the same time. Until someone observes. then, nature chooses one of the various possibilities. In Science_fiction for the moment everything happens and at the same time. At least until you come in and see it.

Science_fiction is a rapprochement to science, an investigation by an unscientific mind.

“It is, at a single sitting, a tournament of knowing, a lecture, a class, a magic session (where you can see how it's done), it's a concert, a spectacle to which many have not come (yet), it's a night of Thai food in the apartment of the guys from Big Bang Theory, … It is, in short, a good time to reflect on the different ways of being on stage and of getting closer to that thing which is contemporary performance”.