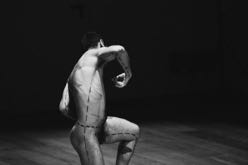 A dance show by Javier Vaquero

In Danzas primitivas (The Show) Javier Vaquero tackles dance from a perspective that could not be more instinctive and unprepared: dance as a mere reaction of the body to the rhythm of the music. Hence its “primitive” character, which appeals to an essential condition of human nature, predating even language and reason.

Beyond this piece, Danzas primitivas has been a long working process during which different works, texts and experiments have emerged, including “24 horas bailando” which Vaquero performed without a break between 1 pm on 10 December and 1 pm on 11 December 2011 in La Poderosa. If you’re interested in reading more about this experiment or other materials on the investigative process, check out the blog http://www.tea-tron.com/danzasprimitivas.

In his long search for these essential origins of dance, Javier has inescapably run up against certain contradictions. Although it is true that the phenomenon of dance is found in all cultures and is inherent to human nature, it nonetheless varies in each of the cultures in which it occurs. Just like language: that primitive nature is entirely cultural. While Vaquero's project started from a certain impossibility, the chief interest of the piece ends up lying in the tension between the instinctive and the cultural. Perhaps for this reason the work does not commit itself to any particular style of dance; rather the performer allows himself to be led by each successive song. Totalhus, “Danzas primitivas” is a sum of short solos whose only point of commonality is the intense pleasure that the dancer feels in performing them. A pleasure which, due to the empathy that the movement generates, inevitably spreads to the spectator.