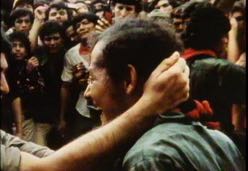 We will close the Europe, Future Past season by inviting Stoffel Debuysere to curate and present a session of screenings to reflect on transfers between the militant film archive and contemporary practices.

The first film in Karlin’s four-part series on the Nicaraguan revolution that brought down president Somoza’s regime in 1979. Voyages is composed of five tracking shots gliding over blown up photographs that the acclaimed photographer Susan Meiselas made during the insurrection. The film takes the form of an imagined correspondence which interrogates the responsibility of the war photographer, the line between observer and participant, and the political significance of the photographic image. “Photographs are in a way far ahead of our ability to deal with them - we have not yet found a way of dealing, living with them. We have appropriated them in a channel - ‘language’, ‘papers’, ‘magazines’, ‘books’ - all of which seem the only tools by which we can give them an earthbound gravity. We brush past them, flick them, demand of them things they cannot give… Liberate photographs from its priests and jujumen - including myself. We do not need interpreters. We need looks - and thus the task is up to the photographer to renew his or her contract i.e. what can photographs and their arrangement do to defy the prison house interpretation à la John Berger - and make us think of ourselves in relationship to Nicaragua.” (Marc Karlin)

"A love story about the city and its undesirables," this third film by the Black Audio Film Collective evokes the New London - in the filmmakers' words "a fading world of being and unbelonging:... invisible communities, the displaced and the rise of redevelopment."  “The film presents an imaginary epistolary narration of a young woman’s thoughts as she writes to her mother in Domenica about the changing face of London, then in the throes of the new Docklands development. She fears it is a city that her mother would not now recognise should she return. The film cuts between this narrative voice and interviewees bearing witness to their youthful experience of the city as a territory mapped by racial, cultural, sexual, gender and class boundaries, a place ‘of people existing in close proximity yet living in different worlds.’ This polyvocal narrative moves restlessly back between past and present, reflecting on the loss of roots and erasure of history caused by the demolition of old established neighbourhoods. The further displacement of already marginalised communities falls under the shadow of the films’s recurrent motif of the public monument to a heroic British imperial history notable for its effacement of its disruptive descendants.” (Jean Fisher)