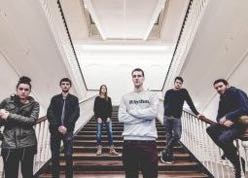 ERAUL At the end of last summer, Alexander Engeline recorded four songs in Basque and English. Asier Beramendi's naked songs (they only have an acoustic guitar, an occasional harmonica and an emotional voice) are behind Eraul’s music. It is amazing to listen to it at home, under the blankets, in the cold winter nights. THE NEW RAEMON After being the leader of Madee for over a decade (a rock project that approached Sunny Day Real Estate on the one hand, and Archers of Loaf from the other), in 2008, Catalonian Ramón Rodríguez decided to turn a failed relationship into a song. That’s how ‘The New Raemon’ nickname was born and, changing the language (from Spanish to English), he released the A propósito de Garfunkel record that year. He opened a new period in his career, the most productive period, and the folk-rock singer was born, alternating between indie and mainstream. After his second work (La dimensión desconocida, 2009), the snowball grew and grew, and international labels started knocking on his door. However, he turned his back on them and entered a darker period that was shown in Libre asociación (2011) and Tinieblas, por fin (2012). He released his fifth album in 2015: Oh, rompehielos. This work combines the light of the first two records and a more acoustic sound, on the one hand, and the darkness and electricity of the last two, on the other. In September, he published the El Yeti EP, which includes two new songs and covers of Love of Lesbian, Mishima and Julio de la Rosa. CLEM SNIDE (EEF BARZELAI) As one of the most prestigious music critics of recent decades, Robert Christagu, said, American Clem Snide is a perfect example of indifference. In the beginning, he was an example of the alternative country that was trending at the time, with Eef Barzelay always on top and with the baton in hand. However, as time went by, he put aside that label, and became a synonym of elegant rock and fine irony. He knew how to drink from the past of people like Buddy Holly, Hank Williams and Chet Baker, in order to live the present. Between 2006 and 2008, the band went on a technical hiatus (Eef took the opportunity to release two solo albums) and, since then, it has become his own thing: Mr. Barzelay’s. He is a kind of a ‘one man band’ who works with other musicians every once in a while, when the situation and the arrangements require it. Because of that, beyond a biographical aura, all the records that Clem Snide has published since 2009 (five, after Girls come first is published in March) emphasise the personal brand of the author: especially the lyrics, of course, for better or for best. Also, the presence of the first person singular is greater in live concerts and, maybe, that is why he looks more confident and not so indifferent.