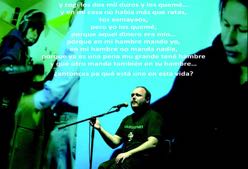 Los Flamencos have been working on their project Cantes tóxicos since 2012. Like the ‘versifying machine’ invented by by Antonio Machado's character Juan de Mairena , the performers use this artefact to recount, sing about and depict some of the outrages of neo-liberalism.

Concerned with the problems of popular art, naturalism and the media, Los Flamencos investigate new forms of aesthetic experience that advocate a binding relationship with areas of knowledge and praxis that have traditionally been set apart from the sphere of the aesthetic. At its core, the work is at once closer to and much more distant from traditional “realist” references.

The materials out of which their Cantes tóxicos are built are film archives recovered from the immense garbage can of Youtube, news rescued from the media and Flamenco notes forgotten among the fiesta songs. The Cantes Tóxicos might be said to be hybrid tales from our days, like kaleidoscopic collages, alternating between the world of poetry, the performative art of flamenco, critical discourse and audio-visual production, which depict the new social scenario built with and on the pain of the people.

Cante tóxico nº III (Toxic Song No. 3) encompasses traces of protest and the agony of a population watching those at the top hijack democracy and drag the lives of those at the bottom into the garbage. This is expressed using elements of personal life and critical judgements on the state of indictable offences from the amendment of Article 135 of the Constitution (an instrument of subjugation passed in a bipartisan agreement on 28 August, 2011 to satisfy the requirements of the Troika), and the Public Security Act (an ad hoc gag created by Royal Decree to restrict citizen protests following the Indignados anti-austerity movement).