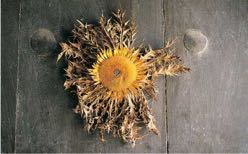 People in the Basque Country still hang eguzkilore, a flower similar to the thistle, on the doors of their homes even today to drive away genii, witches, mythical monsters known as Lamias and evil spirits. Cale, cale, cale! Caale!!! (Autumn, Autumn, Autumn! Autuuumn!!!) is the last part of a magical spell cast to protect against storms by a priest in Basilicata, in southern Italy, until relatively recently. As Ernesto de Martino argues in Magic: A Theory from The South 1, the choice between "magic" and "rationality" is one of the major areas that led to modern civilisation . Magical places and moments are connected to nature in several examples down through history. Apart from the close link in Basque culture between the social and the nature, the attachment to the land of its people, the specific way of relating to it, and the deep cultural roots underpinning it,  we consider some of the stories that Martino tells in his book about magical practices associated to the peasant workforce and the work in the fields of southern Italy; the development of Catalan Spiritism in the 19th century 2, which starting from the practice of mediumship, structures the egalitarian practices where budding movements, such as feminism, antimilitarism and cooperative and cultural associationism, would flourish; or the research of the Peruvian anthropologist, Marisol de la Cadena 3, into the relationship between indigenism and "policy" focused on Mariano Turpo and his son Nazario, two politicians specialising in rituals in the Andes mountains of Peru which combine nature and culture in sacred and secular spheres.

Cale, cale, cale! Caale!!! questions what is the place of magic, ritual and the irrational in relation to nature in the Anthropocene Era. When humanity has reached a limit with the traditional knowledge acquisition methods – natural sciences, on the one hand, and humanities, on the other hand -, which paths can be opened up by paying attention to those moments if we finish with the old distinctions between magic and rationality? What type of political and social proposals can emerge from those irrational and fantastic spaces in the knowledge spillovers between the cultural and the natural? Which sites of resistance for specific ways of life that are tending to disappear in global uniformity can emerge from here?