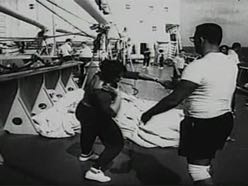 This session includes three films by Santiago Álvarez, in which his characteristic work of editing, appropriation and satire gradually take form. Cerro Pelado takes its title from the name of the ship that took Cuban athletes to the tenth Central American and Caribbean Games, held in 1966 in San Juan, Puerto Rico. Because the island was an American colony, the US administration sought to prevent the Cuban delegation taking part. This is a long report with few commentaries and includes one of Álvarez’s signature touches: the use of music to achieve a biting satirical effect. Hanói, martes 13 was made during the director's first trip to North Vietnam. The film is a subtle, poetic anti-report which develops a structure of interruption and resumption to capture the experience of living in the midst of a war. Hasta la Victoria Siempre is the epitome of both urgent cinema and historical film at the same time. It was made in 48 hours of uninterrupted work, as a response to the traumatic news of Che Guevara’s death in Bolivia.