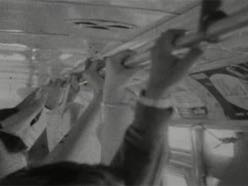 In a three-part series, this session looks at the growing variety of themes and the way the perspective of this documentary movement has developed. Gente en la playa, by Néstor Almendros, is pure free cinema. With no commentary and unsynchronised ambient sound, the film is a spontaneous portrait of families doing the sort of things families typically do on the beach. The subtext is that this multi-coloured mixture of blacks, whites and mulattos would not have been possible before the revolution, when people of colour were not allowed on the island's beaches. Hombres del Cañaveral, by Pastor Vega, is a simple day-in-the-life account of a team of urban volunteer workers in the sugar cane harvest. The film reflects the ideological debate on the moral qualities of work in a revolutionary society, but shows none of the shrill propaganda of the political pamphleteering. The session ends with two films by José Massip. Guantánamo shows the US naval base from the perspective of the Cubans living in the neighbouring city and exemplifies the experimental movement of the mid-decade. Madina-Boe represents another important facet of the ideology of the revolution: solidarity with the African liberation movements.