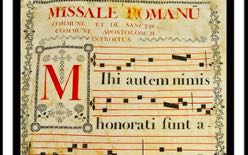 After more than 40 years, the Donostia-based choral society Ereski are still going strong. Since they first climbed to an international stage in the 1980s, they have won numerous awards and plaudits. Among the various groups in the society, the school of Gregorian chant is one of the ones with the longest tradition.

“No changes. No developments. No ideas. No resentment. Here comes nothing.” There can be no excuse for anyone presenting Vomir's music according to these precepts. Even calling it music can turn it into a risk. The music of Vomir, or Romain Perrot, the individual hiding behind that pseudonym, is a monolithic, unmovable, clear and eternalised noise. Some have defined it as a Harsh Noise Wall.

The music is stimulant for definition. It cannot be of another form. The interior logic of the music, that one that objects resistance again and again to the rawest animality as well as to the most developed rationality, guards its aptitude to generate his own rules in the indescribable thing, in its own monstrosity.

The Gregorian music, to which from the Middle Ages we grant certain modelidad to influence our affections, is actually, a music that it does not need of listeners. A music without another hearing that his own interpreter. A sound that provoking hipoxia those who interpret it and making vibrate the architecture, is capable of behaving to the extásis. In this respect, he shares logic with the noise. Both of them are music that are not necessary listeners. But we are what we hear and, furthermore, we want to hear. In occasions, without need to listen.