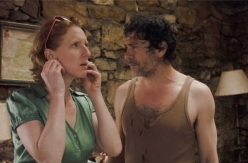 A family house in the middle of the country, a wedding announcement, some characters singing their lifes... Is it a musical, a critic about the current crisis, an audiovisual UFO, one of the surprises of the last Berlinale? And, an exercise of pure freedom.

Wherever you may go in Europe, we are all to be found being afraid to lose our riches instead of doing something useful, or even joyful, with that wealth. Thus, following Reventlow’s proposal: “Let's play that money game as if it were the only thing that really matters”, soon we realized that we were working with some kind of desperate happiness; a journey that seemed to lead to nothing but painful irony. But it also gave us the chance to work with masks, to play a summer theater, to put a distance with a situation that it is not at all so far away from our day to day. And that is where one of the doors that leads to reality can be found: when a mask reveals a truth. Gain access to a truth, an emotion, through the mask.

But there is no center in the scenes. There is no center in the film. A flow of ideas from which it is impossible to obtain a single meaning. The idea is that the camera should maintain a distance so that the aura of each of the actors is preserved. We did not enter the bedrooms. A close up is a basic tool used to psychologically load a film. Since this film is by no means dogmatic, we filmed some close ups. Cinema is a hard job to do, maybe that’s why it has failed. It’s aggressive, or perhaps more correctly: it can be aggressive with reality. When fiction and representation is possible, then reality becomes content. The camera knows more than we do. A gathering of friends. Their enthusiasm lies in their freedom. The more freedom they have, the more enthusiasm they feel. And vice versa. The punishment to those who do not submit to work morale will be to suffer a money complex. Whatever it may be, it will always involve facing up to reality. Saying things directly at times, showing things as they really are. Slightly seriously and somewhat jokingly. Leisure in excess, but beyond that: lack of experience.

The anxiety of improvised takes. When do they start, when do they end? Cinema makes us stronger, more aware of our fragility. More capable of coming to terms with it.

Films from the international festival circut and independent distributors. Each film will have three screenings: