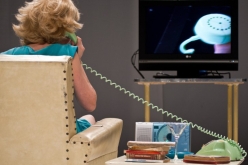 An activities programme is run on one Saturday a month where young and old have fun together. The proposals come from artists, performers, musicians, dancers, filmmakers, narrators, etc., who bring the performing arts to any type of communities with the aim of generating encounters that normally do not occur.

A few books, a television, a camera and an armchair with its back to the audience. A woman sets this mechanism in motion and, by doing so, creates a live film of which she herself is a spectator. The spectator watches a watched spectator who watches. Through the use of the camera, there are two realities taking place simultaneously, with a live situation and a film scene unfolding thus.