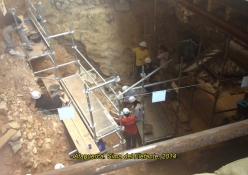 Tabakalera, as a centre for the creation of art, developes a programme with the aim of offering artist and cultural agents a working space and support, conceptual and technical, for the development of artistic projects. The main goal of this programme is to provide support for artistic and creative processes, both technical and conceptual, and at the same time attempt to contribute to the professionalisation of the beneficiaries. In this framework, Antonio Macarro, actual resident, will make a presentation on his documentary The Lost World, project that is developing during his residency in Tabakalera.

This project sets out on a tour through various locations in which there are different recording and documentation processes; actions on which the contemporary story is structured and shaped.

What are these processes through which the facts that constitute the narration of our story are classified, written and constructed? Who legitimises them? On what objective and scientific basis are these methods based? What fiction mechanisms are involved in it? These are just some of the debates that have been generated in the course of filming.

The very attempt to record these reflections and generate an audiovisual document from them lead to questioning any device for generating narratives. The characters and their journeys, which introduce us to the different episodes on the tape, merely awaken more questions on the very construction of audiovisual language, making evident the existence of certain outdated structures and a tradition, vocabulary and film system that no longer seem to be tools capable of representing or relating the complexity of the present.

The Lost World is taking shape through sites as disparate as the Aquitaine Archaeological Museum in Bordeaux or archaeological sites in Atapuerca. Small stories unfold and intertwine, thus broadening horizons and doubts, creating endless ways to tell a story that we know to be impossible to form as a single, linear and unequivocal whole.